In the second leg of our 8-day road trip of Tierra del Fuego, we tell you why Cerro Sombrero is the perfect place to stop before heading towards the unknown in the south of the island. If you haven’t already, read Part 1 of this series.

After a short drive on paved road from the Primera Angostura ferry terminal, we arrived to the village of Cerro Sombrero, our home for the night. We caught the end of a fiery sunset as we searched for a place to park the van. Luckily from our vantage point we saw a slightly overgrown camping area with picnic tables. We’ll take it.

Cerro Sombrero was established in the 1950s by ENAP - the National Petroleum Company of Chile. We had very little expectations for this small town of 700 habitants. Wow, were we wrong. Not only does Cerro Sombrero have a free primitive camping area down by the river, but the town is a van-life haven with public bathrooms and showers (very clean) and fast wifi (all free!). The tourist information center is brand new. What a luxurious first night on the road. 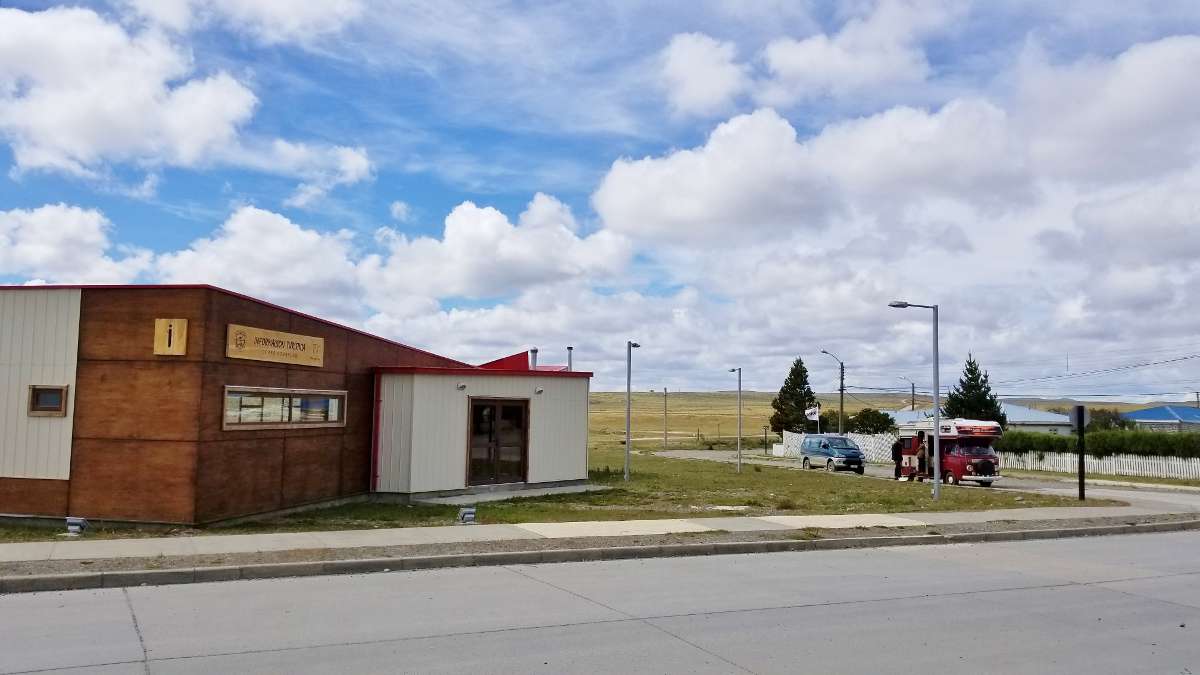 The next morning after a long hot shower, some maps from the tourist center, and a full tank of gas, we were ready to hit the road. We didn’t check it out but there’s also a supermarket in town, the last you may see for a while.

Tip: There are only a handful of places to get gas on the Chilean side of Tierra del Fuego - Cerro Sombrero, Cullen, Porvenir, and Russfin. Fill up wherever you get the chance and we would recommend keeping an extra container as well (we had an extra 20L).

We drove towards Cameron across the flat pampas. After about an hour we reached Onaisin, the end of the paved road, and the beginning of Route Y-85. Let the real adventure begin.

A couple minutes down Y-85 and we reached our next destination of the day: Parque Pingüino Rey. We had already seen small Magellanic penguins near Punta Arenas and were excited to see the second largest penguin species - the king penguins. After walking amongst thousands of penguins on Isla Magdalena, our experience at Parque Pingüino Rey was a bit underwhelming. There was an observation area where we could see about 20 penguins huddled together near the beach. Although it’s for the best that the park is set up in a way non-intrusive to the penguin habitat, the price felt steep.

We said chao to the penguins, we threw together a quick lunch in the parking lot. After a much needed coffee we continued driving along Bahía Inútil to the small town of Cameron, our gateway to the Timaukel region of Tierra del Fuego.